The Aquadetox is a knock-off/imitator of the BioCleanse, which is now sold as the IonCleanse. It was created by a former distributor of ours, who partnered up with someone that has a history of knocking off others’ technology. This unit is NOWHERE in the same league as our technology. There was a long ongoing conflict between our company and this distributor, “A Major Difference”, Bob Moroney (1940-2012)  (2013:- Now described as an ex visionary inventor, a pioneer in alternative health care. Please see the definition of imitator at the end of the article) prior to this. He insisted on selling the units by way of telling people that the watercolor changes were the result of toxins going from the body into the water. After a year of constant battling and having to deal with the resultant crisis management as people either bought a unit and used it in good water, which stayed clear, making them think the unit was not working; or worse, they would put the array in the water, turn it on, get distracted, and come back to find the “toxins” in the water with no one present. They would then demand their money back claiming that the unit was fraudulent. 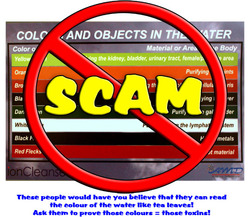 Early on, as a biochemist, I did several laboratory tests to check if there were, in fact, toxins going into the water. I found NO evidence at all. What is found in the water can be explained by the electrode metal constituents and the impurities originally dissolved in the water.  I have seen“reports” these people use as evidence that there are toxins in the water, but everything I saw was poor science. That is, there were no adequate controls. In this case, one would need to test the water before the array session, the water after the array session WITH NO ONE IN IT, and water after the array session with someone in it. In every case, all I saw was a before and after, no water without a person but using the array control. All the purported heavy metals that increased most likely can be attributed to impurities in the electrode metals corroding into the water. 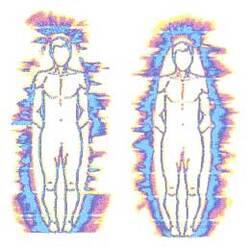 The reason has to do with what the true nature of this technology is all about. The purpose of this technology is to create the perfect environment for water to convert electromagnetic energy formed around the active array into a bioenergy field. Water has the natural ability to do this given the optimal conditions. This is what is occurring in bodies of water that are famous for their healing powers. In those waters, the local conditions – geological, geographical, and other unknown factors – allow the water to convert local magnetic fields, thermal energy, or kinetic energy (motion) into bioenergy.

The bioenergy that is haphazardly created by these devices attempting to “draw toxins” is a byproduct of mixing DC electricity, stainless steel, and water. What is NOT happening is the creation of a coherent, purposeful biofield as in the QEnergySpa Our contention is that providing the bio-energetic resources and the coherent field, allows the body’s own innate intelligence to use the energy resource as it sees fit, and the coherent field allows greater information access to the person’s core biosignature. This is very much an energetic process.

That is not to say that there are NO physical effects that may be beneficial from knock-offs.

The one thing that some have focussed on is that there is a dramatic decrease in the ORP (oxidative reduction potential) of the water. ORP, or REDOX, measures traditionally the availability of free electrons. The reading is with an ORP meter and electrode. The measurement is in mV. A positive mV reading (i.e., +1 to +800 mV) means that the water is reducing, that is that there are electrons to contribute. The long and short of it is that antioxidants do exactly that: they contribute electrons to quench or neutralize free radicals.

Now the ORP scale is semi-logarithmic.

That means that the differences are much more between values than the simple numeric amount. In the case of ORP, I believe that an amount of ~53 mV represents an order of magnitude (a factor of tenfold). So this means that if two readings are 106 mV apart that the difference is 100 times, not just the 106 value.

Now to put it into perspective, at least here in the United States, the tap water is usually between +400 to +500 mV. That means it is very oxidizing (maybe as a result of added chlorine). Water in renowned healing-type locations is ~–200 mV. So in these locations, we are talking a difference of 600 to 700 mV, which is a difference of 10 to the 12th or 10 to the 14th, or one trillion to 100 trillion times! The water measured in the Q bath is –400 to –500 mV or an additional 10 thousand to one million times! As a footnote, the water that I have measured from the BioCleanse and other knock off’s is between –100 to –300 mV. Even at –300 mV the difference compared to –400 to –500mV is one hundred to 10,000 times or a fraction of what the QEnergySpa can provide.

I am hopeful that you may make your own decision to purchase this true healing tool known as the QEnergySpa. Please do not waste your time with just any imitator ionic footbath out there that makes remarkable marketing claims.

Benefits speak for themselves…

The statements on this site have not been evaluated by the FDA.
These products are not intended to treat, cure, or prevent any disease.