There are several previous models of the QEnergySpa® and water modules that are no longer available for purchase.
However, if you already have one of these models, we do have parts available (Rings and Track). CLICK HERE to order.

The history of this technology, known as the QEnergySpa began in Australia, early 1996 when Mr. Terry Skrinjar (pictured here) and friends contemplated and debated potential technologies based upon Quantum Reality Field Science (QRFS), a term coined by Mr. Skrinjar. With a strong interest in alternative health, the question was posed: “Could QRFS be used to create a device that would have the potential to “cure just about anything”? With this challenge, Mr. Skrinjar proceeded to draw up design specifications of the world’s very first unit “created to re-balance and amplify the Bio-Energetic Signature of the body” – Terry Skrinjar 1997. The intention was to use water as a medium, due to its unique properties.


The initial design of the Gizmo prototype was constructed, consisting of a series of parallel rings to act as an antenna or Array. Scaled up a prototype (Gizmo). A company was formed in order to develop and market this innovative product. Upon completion, the Gizmo was trialed, with a suitable power supply, by a number of family and friends associated with QtheExperience. With numerous benefits reported the commercialization of this device began.

The Gizmo was later called the “Array” of the Bio-Electric Field Enhancement unit (B.E.F.E. unit), which became the “Q2 Water Energy System”, followed by the “Q2 EnergySpa” and now marketed as the “QEnergySpa”.

The Array 2000 (water module) was QtheExperience’s second mainstream Array. It was shipped with the B.E.F.E. power supply model numbers: 3006, 3024B, 3024D, and 2100s.  During the following two years, QtheExperience researched and developed both the original Array and the power source to drive it. Several design changes were made, pictured to the left, to make the unit more user-friendly, aesthetic and to allow for commercial production. However, the core construct and composition of the rings in the Array remained virtually unchanged. CLICK HERE for the step-by-step illustration on how to change the Rings and Track.

It was also during this time that Mr. Ivan Serensen joined the company as a Director and Electrical Engineer. Redesigning and building a new power source properly based on the Quantum Resonance principles to power the Array in order to further improve the technology. He is still our engineer today.

Laboratories. It was released in January of 1999.

The B.E.F.E. (Bio-Electric Field Enhancement) Unit model 3024 was the second mainstream power supply released to the public by QtheExperience. The first revision was designated 3024B, followed later by a second revision designated 3024D. The 3024B was released in September of 2001. The BEFE-3024 The Q2 Water Energy System was upgraded to include a built-in attenuator. The design is more compact which also allows for the use of less water making it more environmentally friendly. Although the BEFE has received official approval from the Australian Therapeutic Goods Administration (comparable to the US FDA) for marketing as a therapeutic spa/medical device, Skrinjar points out that it is not actually a medical device and does not diagnose or treat any disease. Rather, it is a sophisticated spa system that energizes water, which is used as a conductive medium. The body itself does the healing, after absorbing this bio-energy as needed.

In 1999 QtheExperience became International and as such had to comply with the International Electrical Safety Standards required that the rings and components within the Array had to be fully enclosed, so that the user can not make contact with the rings. This was the impetus and birth of the Orb as shown here. The enhanced design of the NEW ORB vs. the Old Array – allows for less interference from the tracks connecting the various rings to the power source. This means that the ORB can establish a more effective quality of field, improved clarity, and bio-energy enhancement between you and the water. Today there are thousands of these units throughout the world and the number is growing exponentially as the word spreads about the benefits this technology provides for its users.


… this NEW System, known as the Q2 Water Energy Spa System. The Model 3100 replaced the BEFE 3024D. New models included the Personal Use Model 2100 and the Professional Model 4100.  Also, the new ORB II – pictured below, replaced the ARRAY. 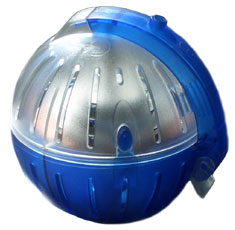 This enhanced design and assembly of the orb include a (blue bottom shell).
The enhanced design of the NEW ORB includes a latch for the cable to attach
more firmly.  This means that the ORB can establish a more effective quality
of field, improved clarity, and bio-energy enhancement between you and the water.

The enhanced design of the NEW ORB II, made with clear acrylic allows for less interference.
This means that the Orb can establish a more effective quality of the field, resulting in improved
clarity and bio-energy enhancement. The latch is now part of the bottom shell, making the cable
easier to attach, for ease of use and functionality. 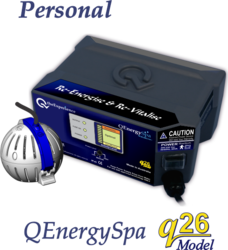 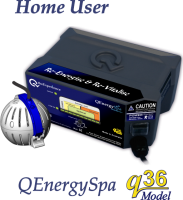 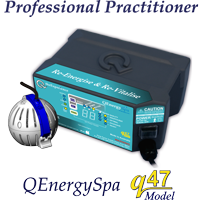 This release supersedes the previous q46; including a significant improvement in stability and power clarity. The q47 boosts the overall bio-energy efficiency and is also available as an upgrade
for all users of the models 4100, 4105, and the later q46.

This model will be the ultimate in Anti-Aging, faster recovery, and overall health. Re-Energize & Re-Vitalize your body for wellness you will soon discover to be better than you have felt in years. In fact, potentially 5 to 10 years younger. Currently taking PRE-ORDERS NOW: Order New Model: q6000

Today there are thousands of these units throughout the world and the number is growing exponentially as the word spreads about the benefits this technology provides for its users. Nothing works better and performs like the Original QEnergySpa. For that reason, insist on it ONLY. See all of our QEnergySpa products. Go here.

You may always contact us with any questions or part requests.

We are here to help you set up your session. Nothing looks and performs like a genuine QEnergySpa Footbath. For that reason, Pros insist on them. Do you need spare parts for your QEnergySpa Footbath? Does your orb or array have a broken or missing part also? Then you have found the right place. Q2Spa.com Online Since 2002

First of all, we have QEnergySpa Parts in stock.

Solid, untreated, unvarnished copper tubs – which have the potential 10% to 30% increase in efficiency! The most asked for parts include cables, fuses, orbs, and ring and track sets. Service Parts for QEnergySpa, orbs, arrays | User Guides and Manuals. Even more, see our newest QEnergySpa Pro q6000 online, Go here.

The statements on this site have not been evaluated by the FDA.
These products are not intended to treat, cure, or prevent any disease.